NWC files can’t be loaded in Navisworks 2012 NWFs - Beyond Design: the Construction and BIM blog

NOTE: This has now been fixed in the Navisworks 2012 Service Pack 1, files will need to be recreated for changes to take effect.

We've had a couple of people report that they receive a 'Can't load ***.nwc because of an internal error' or 'This file contains data that requires an additional Navisworks license which is currently unavailable' message (see pictures below) when loading an NWF with updated NWC files. This may happen if you have upgraded from Navisworks 2011 (or earlier) to 2012 mid project. 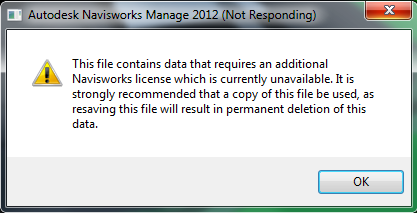 With the introduction of 2D Multi-sheet support in Navisworks 2012, we've had to slightly change the structure of NWC files to handle this. Whereas an NWF file looking for a 2011 NWC file (i.e. an NWC created using the Navisworks 2011 exporter) would just reference the file name, when referencing a 2012 NWC file we also look for a default 2D sheet (or dummy sheet in the case of NWC files with no 2D data). The errors can therefore occur where a NWF was originally created referencing older version NWC files, which have since been updated with 2012 NWC files, and the NWF isn't detecting that the 2012 NWC files are of this new structure.

There are two possible workarounds at the moment.

Continue working with 2011 NWC files, this would mean you would need to be on the 2011 version of the CAD application too as the exporter isn't forwards compatible, only backwards compatible.

If you want to work with 2012 CAD applications, remove the 2011 NWC files from your NWF and rebuild it using 2012 NWC files.

Hi Michael, this has now been fixed in the Navisworks 2012 Service Pack 1 http://beyonddesign.typepad.com/posts/2011/09/navisworks-2012-service-pack-1-available-now.html

We are aware of this and it has been raised with development. We haven't got any targeted date for a resolution yet but we'll let you know here first!

Any ETA on the resolution to this problem?
What is the added set of features in the nwc 2012 vs 2011 to force users to go through the update of exporters every single version?