Why does my model look sectioned? - Beyond Design: the Construction and BIM blog

Why does my model look sectioned?

More and more people are working with big models, or models on large ground planes. On rare occasions there can be some odd behavior where the model doesn't display as you would expect.

Sometimes objects in the distance may be cut out like this.

And sometimes you may not see anything at all

To optimize performance Navisworks doesn't draw everything at once. We will calculate how to draw as much of the model as possible needed for the view, versus not showing things you don't need to see, as they would be behind or below you.

The reason why Navisworks doesn't draw everything level with your eyes is that a ratio (of 1000) is used to include as much of the model as possible, meaning if we bring the forward clipping plane closer to the camera, we also need to proportionally bring forward the far clipping plane, this results in objects in the distance not being visible. The ratio is limited to 1:1000 to prevent issues with faces displaying incorrectly.

Problems can start when there are spurious objects a long way from the model as in the next image, or there is a very large ground plane relative to the rest of the model.

Where this happens Navisworks will have to move the far clip plane much further out, meaning the near clip plane is also dragged forwards, giving the effect of a section in front of the model. In the worst examples this can mean the entire model disappears.

The three best ways to rectify this are 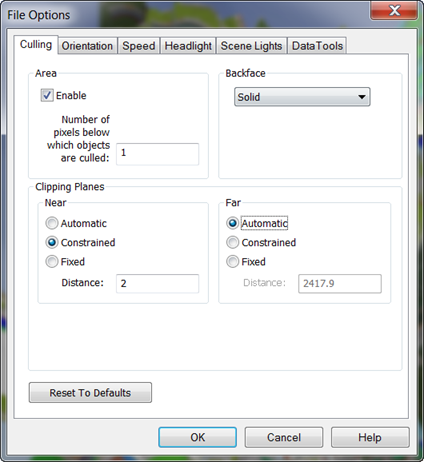 In examples where a large ground plane causes this, you should look at modifying the ground plane to take account of the vanishing point, often very large planes are not necessary. Alternatively modify the clipping planes as above.