6 rules for coordinating construction models with BIM 360 Glue - Beyond Design: the Construction and BIM blog

You've probably heard how BIM 360 Glue enables better collaboration on your project. If not I highly recommend watching this video on capabilities and benefits of BIM 360 Glue.

Now let's take a more detailed look at how that works in practice and which steps you need to take as a BIM manager to make it happen.

Firstly everybody on the team is looking at the same aggregated model that is the federated from all the individual discipline models. That levels the playing field as everybody has the same view. Of course that requires that folks upload (or glue it as the Glurus call it) their model regularly or at least when significant changes and updates have occurred. This has some advantages: no more guessing where the latest model is or whether you are even looking at the latest version of the model. It also is very easy – if you can operate a web browser you can view the aggregated model. Simply viewing your own model in the context of others provides have a significant advantage.

Secondly it puts the power of clash analysis into the hands of many. This empowers every user to validate their own design against the other models and to resolve clashes much quicker by directly liaising with others on the project. Not only does that speed up the process it also gives the BIM / VDC manager more time to focus on the really difficult problems that require their attention. It also means you don't have to spend every coordination meeting discussing a huge number of minor issues – they'll have been resolved already. By having one shared model that is accessible to everybody who needs it you already gain a significant advantage. However this shared model is only as good as the components that it is comprised of. In other words if one of the discipline models is 2 weeks old, so is the aggregated model. BIM 360 Glue makes it easy to update your individual model by simply creating a new version. Anybody who views the individual model will automatically see the latest version. The same goes for the merged model – this will always consist of the latest versions of the individual models. Therefore individual disciplines could and should update their models continuously.

Rule 1: Update your model as often as relevant changes occur

Based on this single shared model the BIM manager can check for clash and check the health of the model. In a typical coordination process it would have stopped with the BIM manager issuing clash reports to everybody. This takes both time in creating the reports, and for the disciplines to consume and act upon. With BIM 360 Glue everybody can run clash tests and check their own model – repeatedly and without blocking anybody else.

Rule 2: Check your work by running your own clash analysis

Depending on your role in the project you may have a different interest in how detailed you need the analysis to be. Some want to know exactly how a duct clashes with a wall. Others are more interested in more high-level coordination status and progress. BIM 360 Glue satisfies both user needs with detailed clash information at the individual clash level and a generic overview with visual representation of clashes using simple icons in the model and a dashboard. 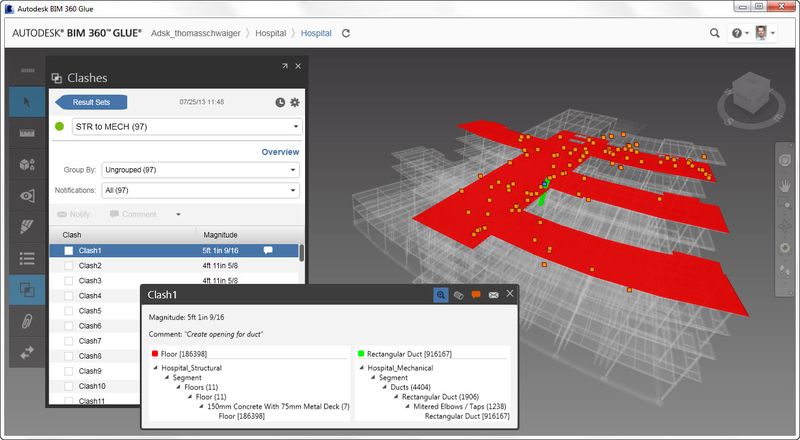 Clash at a glance: Now users can view all of the clashes in a project model at once, so that they can easily visualize the areas of the model that need review and coordination

Rule 3: Use the model and clash analysis for your purpose whether that's detailed clash review or general health check

Another great advantage of a single shared model is the ability to collaborate in it and communicate using it as a canvas. Everybody on the project team can notify other users of clashes, add comments to clashes, and communicate by creating views and markups. Not only is this quicker and easier to do than describing an issue with 1000 words, it also creates the documentation of changes so that you can easily discover the rationale behind a change afterwards if you need to. 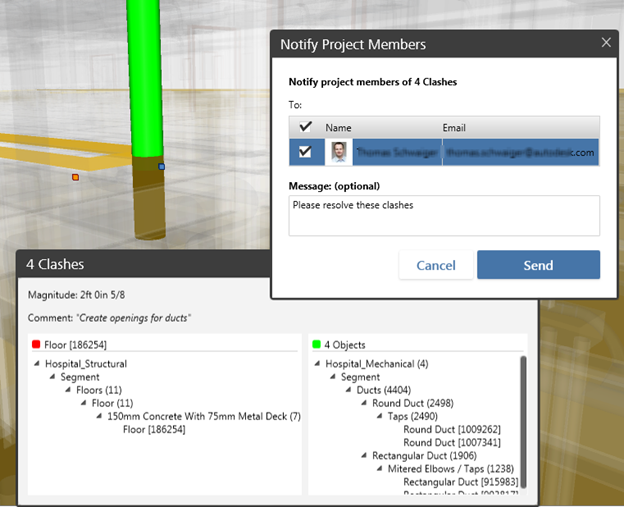 Rule 4: Communicate everything through clash comments, views and markups so that it is visible to the team

Identifying clashes is only half the job. Somebody needs to resolve the issue and the best way of doing that is by bringing the information about the clash straight into the design application. That is exactly what the clash pinpoint feature inside of Revit does. As a Revit user you can access clash reports in the context of your model, and have it isolate the clashing objects. You can also toggle between just the clashing objects and the whole model to provide context. By quickly identifying the clashing objects the user has more time to think about the best possible solution to this coordination issue. After resolving the issue the user would glue the model again, to signify the job has been done and to verify that the clash has indeed been resolved. 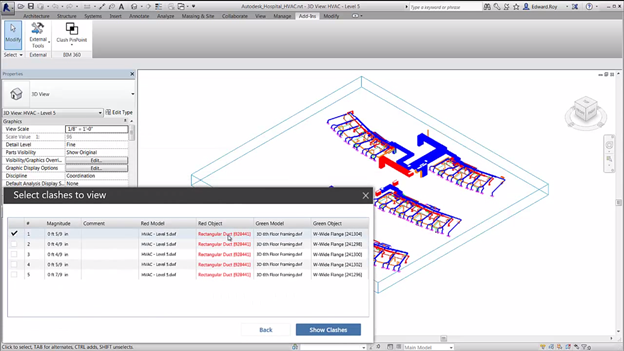 Rule 5: Use clash reports and notifications to your advantage so that information is accessible right where it's needed for quicker resolution

We will follow up in another post with a tip on how to use section boxes in Revit to zoom in on the problem and reduce clutter from the view.

Rule 6: Rinse and repeat until no clashes remain

This is a highly iterative process and should have quick cycles as no big meetings are required for every change. Instead resolve the small items quickly throughout, and focus on the big ticket items during the coordination meeting where it is necessary for project members to have a discussion and everybody's knowledge is required to resolve. With every upload of an existing model a new is automatically created, and you can run the clash analysis again with the same parameters to show the number of clashes going down.

A little bit of work done upfront by the BIM / VDC manager helps speed up the process afterwards. So here's what you should consider:

Have you got your own rules or tips on making coordination work best for a team? We would love to hear from you – please leave your comments below or email us at beyond.design@autodesk.com