Construction Layout with BIM 360 Has Arrived! - Beyond Design: the Construction and BIM blog

« On-demand webinar "How to Use Cloud Rendering in Navisworks" | Main | Innovation: Diagnose Before You Prescribe! »

Construction Layout with BIM 360 Has Arrived!

Just announced on stage at the Dallas BIMforum, Autodesk BIM 360 Glue receives a major new feature bump and stand-alone iOS app. Yes, today we are happy to announce the launch of the BIM 360 Layout app and the companion layout functionality within BIM 360 Glue!

The new BIM 360 Layout app for iOS takes advantage of a recent partnership with the folks at Topcon and their LN-100 Robotic Instrument for laser-based positioning on the job site. By connecting to the iPad, the LN-100 offers a purpose-built hardware solution perfectly tailored to the demands of General Contractors and MEP contractors alike.

The BIM 360 Layout app with connection to the BIM 360 Glue web service challenges modern layout practices being utilized by contractors today. As most layout processes have connections to 3D models on larger construction projects, rigor can now be placed on managing and leveraging the up-to-date, coordinated information by the entire project team for construction layout. BIM 360 Layout removes common data exchange barriers and provides a seamless connection between the real-time coordinated model and the process of laying-out and staking points in the field.

Here’s how the process works. First, the design model (AutoCAD, Revit or Navisworks) with field points created in the Autodesk Point Layout plugin are imported into the BIM 360 Glue web service. Then, point sets can be shared to project field crew(s) via an email link---that when opened on an iPad, launches the BIM 360 Layout app with the assigned point sets ready to be laid-out. Once the field points have been staked, verified or new points collected (all of which can be done while working offline), the field crew can sync the information back to the BIM 360 Glue web service once connected to the internet. The collected points can then be imported from BIM 360 Glue to Autodesk Revit via the Autodesk Point Layout plugin. Within Revit, a deviation analysis can be performed to assess if completed work by an MEP contractor is within the appropriate tolerance and not in conflict with components in the building model. 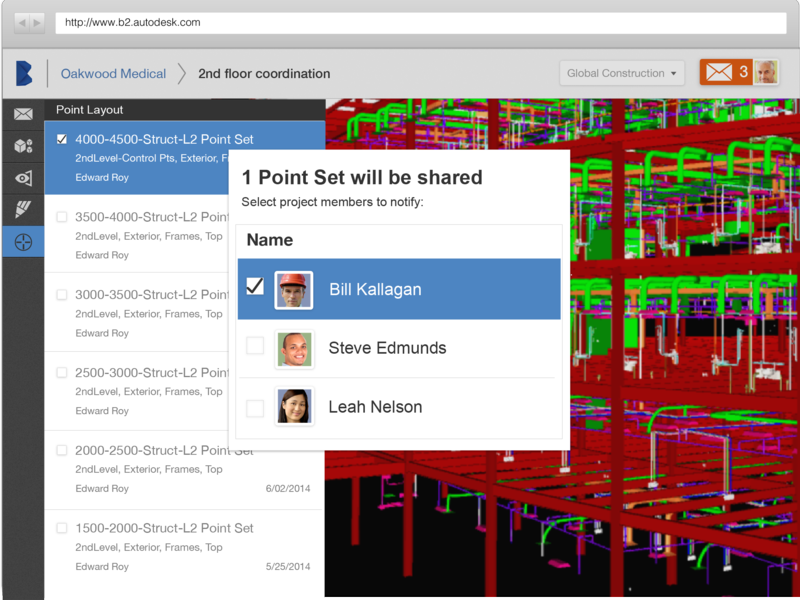 And speaking of workflows!  Along with the introduction of BIM 360 Layout, our recent packaging change of providing Navisworks and Autodesk Point Layout client access to any Project-based or Enterprise BIM 360 purchasing company has made it even easier for contractors to create points in the design model and then provide to field crews for layout. 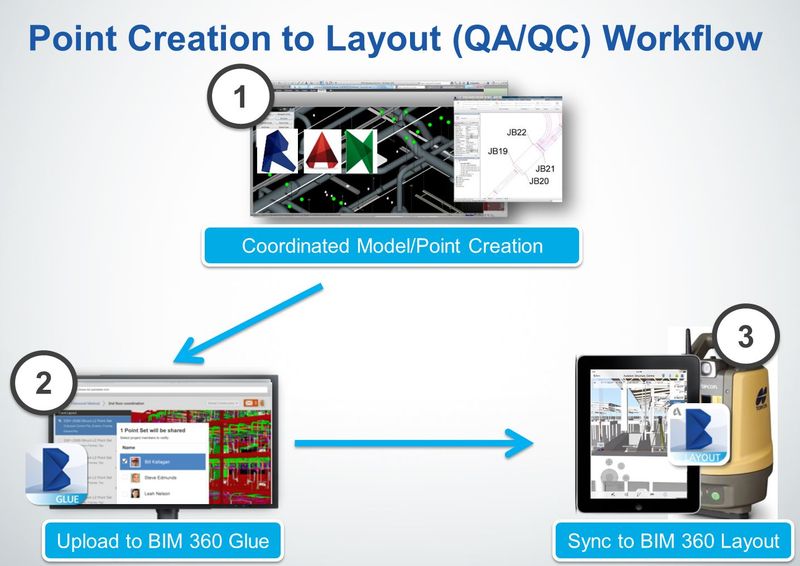 But let’s not just talk about the workflow benefits; the BIM 360 Layout app has an entirely new way of connecting digital point location information with the physical world.  The app running on an iPad provides a first person—immersive view of the building model as the user walks the jobsite.  The prism and total station are represented in the 3D model as they are located in the physical world—giving the user an understanding of where they are in relation to the instrument, and the points to be staked. 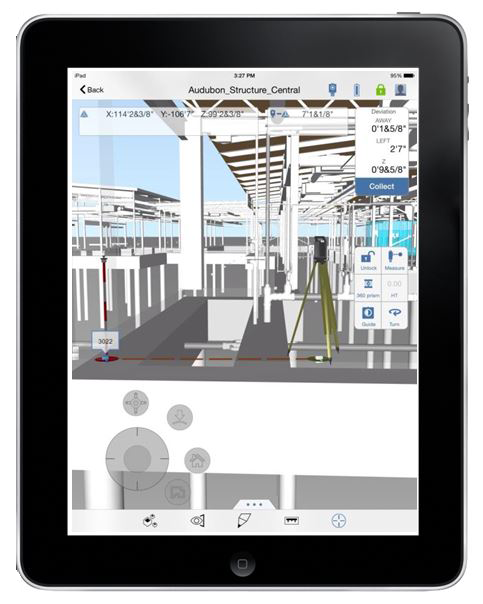 Walking to a point represented in the app’s digital model on the iPad is also user intuitive.  The BIM 360 Layout app features audible alerts that get louder and faster as proximity to the selected point increases as well as a visual “bulls-eye” marker that changes from red to green when the user is within staking tolerance. (oh, and you can switch to plan view mode for those that would rather view in 2D!) 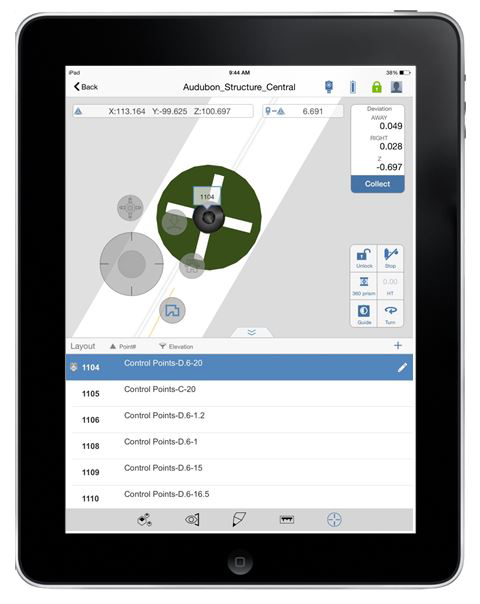 And what about the instrument set-up process with BIM 360 Layout?  For those on a layout crew, you know the challenges of aligning the instrument with jobsite control and obtaining prism lock.  Good news. The Topcon LN-100 is a three-button, auto-leveling instrument.  Just center the instrument over your control point and engage the three buttons for power, WiFi, and auto-level.  Then join the “LN-100 WiFi” network from your iPad, and begin the step-by-step in-app set-up guide.  This intuitive guide aligns the prism to the instrument based on standard “known-point” or “re-section” workflows.  (NOTE:  the iPad running BIM 360 Layout is attached to the prism rod) 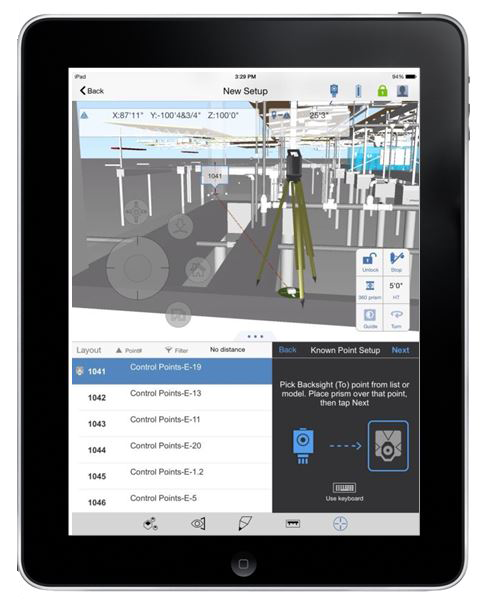 Once through the set-up routine, you are off and running---navigating the jobsite point-by-point using the point list view or tapping into the model and locating a specific point using standard iOS gesture-based controls.  We’ve designed the app based on input and job site testing with BIM 360 customers:  DPR, Mortenson, and PCL Construction.  Their input and direction played a critical role in developing the BIM 360 Layout app from a contractor/field engineer perspective.  Click here to see the reference video showcasing PCL Construction and their use of the BIM 360 Layout app

If you would like to hear more about the new BIM 360 Layout app and layout functionality with BIM 360 Glue, join us for a webinar hosted by the AGC on October 23 at 2:00-3:30PM EST by clicking the registration link here.  In the meantime, feel free to head on over to the BIM 360 Community Portal and sign-up to receive a free “Work Where It Happens” t-shirt---compliments of the BIM 360 team!