Innovation: Diagnose Before You Prescribe! - Beyond Design: the Construction and BIM blog

Innovation: Diagnose Before You Prescribe! 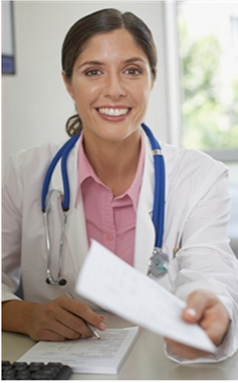 I recently had the pleasure of participating in the AEC Hackathon in Seattle, as well as attending the recent BIMForum in Dallas. At both Autodesk-sponsored events, I was inspired by the sheer amount of creativity and enthusiasm exuded by AEC professionals and software developers, looking to push BIM – and our industry – further ahead into the future with new tools and processes. Some tools drew a fair amount of excitement. In particular, drones and 3-D printing continue to ride a wave of hype, joined by a resurging interest in Virtual Reality (VR) and Augmented Reality (AR) technologies, to extend and leverage today's BIM tools and processes. AEC Hackers and BIMForum presenters are definitely having fun, inspiring colleagues, and pushing the envelope!

Yet, despite the exciting advances for our industry, I was also equally frustrated by the way new (or in the case of VR/AR, new again) technologies were positioned, pitched, and presented. All too often, new technologies were touted as game-changing, with barely a nod to the game they purportedly change.

All too often, "innovators," seduced by shiny technology, leap into technical details and features and functionalities without thoughtful exploration or explanation of the context of real-world business problems. Simply put: too much sizzle, not enough steak. AEC professionals, supposed benefactors of innovation, are left wondering, "What's in it for me?" Unfortunately, this is all too common in innovation, and this oversight when developing new technologies casts a pall on valid R&D when observed by the conservative AEC industry. To claim a new technology is a solution, or the solution, without clear analysis of the problem to be solved, relegates these potential "tools" to the mere status of "toys" in the eyes of practitioners who could likely most benefit from them.

Taking a cue from "Solution Selling"® methodology, I offer to the hopeful envelope-pushers and dynamic pitchmen of new technology: To be successful with your innovation, diagnose before you prescribe!

You wouldn't go to a doctor and expect a prescription handed to you for medication before you can sit down with a medical professional and describe what's ailing you! Why would an AEC "innovator" attempt to do that? 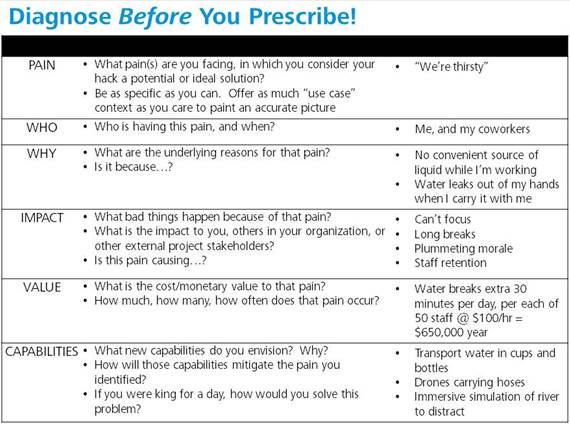 Before experimenting with and applying a solution, and long before touting it as a heroic fix, you need to understand the pain faced by real-world AEC professionals. Be specific, and describe who has this pain, and when. Analyze the underlying reasons for the pain, and dig further to find the reasons behind those reasons. Further, study and document the impact of this pain in an organization, across a project team, or between firms: what bad things happen to others because of it?

If possible, try to quantify the pain and its impacts in real monetary value. Ask specific "MOM" questions, like how much, how often, or how many times the pain occurs. Document this estimated pain, because if you arrive at a successful solution, this is what you can use to calculate a return on any investment in your innovation.

Finally, only after having documented the pain, reasons, impact, and value, try to document a vision for new and extended capabilities from real-world professionals expressing their pain. If they were in charge, what would they want done, and how would it address or mitigate their pain?

Then, and only then, are you ready to brainstorm, hack, experiment, research, develop, pitch, demonstrate, differentiate, present, and ride a wave of success that cannot be mistaken for empty, irrelevant hype.

The split between those who grasp this and those who don't was clearly evident at recent BIM events.

As an AEC Hackathon judge, I was sincerely encouraged by teams that developed their "hacks" in the context of real-world problems. Winning teams were handsomely rewarded, with two top prizes going to teams that focused on solving pain faced by contractors in the field. Their solutions weren't crowded with shiny toys, but were attractive to AEC practitioners because they were relevant and useful. By contrast, other teams enamored with new technologies who didn't articulate their solutions in the context of a business case were summarily dismissed. Their ideas may have been fun to explore, and amusing to watch, but so are circus clowns; ultimately and rightfully they took a back seat to serious teams sincerely mitigating pain to move our industry forward.

This dichotomy between the true innovators and the pretenders was also clear at the BIMForum. The most successful presentations weren't the ones who discussed new technologies simply for the sake of being "new" or "better;" the best ones were those that described their work by thoughtfully including discussion of the problems faced by designers, builders, and owners.

There is certainly nothing wrong with experimentation and exploration for its own sake. But when it comes to developing innovative tools and processes for the AEC industry, where real pains exist and real dollars are at stake, successful solutions can't just be pretty to look at; they must prove themselves to be relevant. The solutions prescribed by innovators must follow a careful diagnosis of the problem.