« Are You Using Navisworks 2015 Tools? | Main | Create True As-Built Models from Points Collected in the Field »

Many people in the construction industry are familiar with "Lean" Construction, and the Plan-Do-Check-Act/Adjust ("PDCA") cycle as an iterative management method to support continuous improvement on projects. 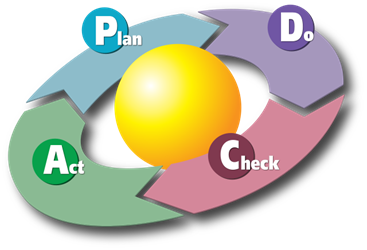 While this four-step process is not specific to construction, informing practically every activity performed in the AEC industry, you can easily apply the process to on-site field labor, where trade partners and subcontractors step through these phases every day.

For example, a carpenter installing casework will: 1) PLAN by carefully measuring and verifying the existing conditions; 2) DO by putting the casework in place; 3) CHECK by inspecting with a level and a plumb; and 4) ADJUST the casework with shims. And the process repeats reiteratively until the work is correctly in place.

Note: In some cases, if the casework isn't installed properly, rework may be necessary. And "inspect" need not be a formal inspection by an Authority Having Jurisdiction; it can be an informal check of the quality of installation by a skilled trade partner. When the work is inspected and completed, as-built information must be recorded. However, since most work goes in right the first time (doesn't it?), and since most field laborers do not necessarily develop the as-built documentation themselves, let's ignore rework and combine "as-built" with inspection, to reflect what the field labor actually does.

In addition to being reiterative for a single trade, the process is also progressive in the "parade" of trades on a project site. In our casework example, the carpenter cannot plan his work by doing layout in the field until after the rough-in and drywall are completed. Furthermore, the installation and as-built documentation of the casework then in turn leads to planning and layout for the countertops, and subsequent trades. In this way, the final state of as-built conditions for one trade becomes the point of departure for the next.

Unfortunately, documentation on the project site does not cleanly follow this process and progression of labor. As-built records are poorly kept during the project, and trade laborers are rarely responsible for sharing accurate as-built drawings in real-time to assist fellow trade partners. Significant time is wasted as each trade partner must become oriented to their task, measure conditions, and plan their work individually as if no previous information was recorded or available.

However, new technologies, such as "Reality Capture," and Autodesk Recap have the potential to disrupt the PDCA cycle, and allow compressed cycles among trades by sharing information. With instruments to capture reality (laser scanners, photogrammetry, etc), "layout" ("plan") and "inspect" ("check") merge into the same activity, where one trade's inspection artifacts become the layout documents for the subsequent trade!

Or, to put it more generically, "Recap" technology enables a two-step process, rather than a four-step process:

Of course, the process is cyclical and reiterative, both within a single trade and between the trades:

As one trade scans their installed work, the Recap artifact as a 3-D document can be instantly re-used/re-purposed as the layout-information for the next trade.

There is a tremendous opportunity to save time and effort across the breadth of a project, between the dozens (hundreds?) of trades that are involved in "check" and "plan" activities.

Of course, it will take more than a laser scanner to change the everyday workflows in our construction industry; it will take strategic thinking, process changes, and training for all personnel who touch a project. Some construction professionals are already getting started doing just that, at events like the Real2015 conference in San Francisco. Others are engaging business consultants, hardware vendors, and software developers.

What is your plan to take advantage of this technology?