Virtual Reality in AEC: An Idea Whose Time Has Come - Beyond Design: the Construction and BIM blog

« Industry Collections, what do they mean to you in construction? | Main | Creating “Win-Win Success” using Navisworks Quantification with BAM UK »

Virtual Reality in AEC: An Idea Whose Time Has Come

It's been 25 years this summer since I was first turned on to the idea of Virtual Reality (VR) as the "holy grail" of design visualization in architecture, thumbing through inspirational musings and essays published in magazines like Cadence and Cadalyst (yes, they were printed on real paper in 1991!). Indeed, VR took hold of many an imagination about that time, as popular media glimpsed into bleeding-edge work by pioneers in research labs like MIT's Media Lab and the Human Interface Technology Lab ("HIT Lab") at the University of Washington. Sadly, VR failed to live up to the hype as it rarely breached the Ivory Tower and into common industry use, and interest in VR largely waned after the 90's like so many Beanie Babies.

That's not to say there weren't valiant attempts to embrace VR in architecture and construction: for decades, VR has captured the imagination of creative professionals seeking the ultimate experience for design and creation. Unfortunately, those visionaries were saddled with limitations like prohibitively expensive technology, strained workflows for content development, clunky interfaces, an infantile internet, and the lack of clear business cases – keeping a lid on any industry enthusiasm for VR for far too long. 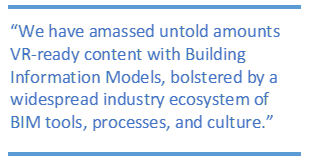 Until now. Or, more precisely, until about two years ago, when practically out of nowhere, Virtual Reality – and the hype that comes with it – came storming back into popular view. This time, fueled by a ubiquitous internet, wifi, and mobile/wearable devices with cheap GPUs, VR (and it's cousin, Augmented Reality) caught the attention of Facebook, Google, Samsung, and practically every other big name in computing media. And this time around, architects and contractors are not immune to the visions that VR inspires. We have amassed untold amounts VR-ready content with Building Information Models (BIM), bolstered by a widespread industry ecosystem of BIM tools, processes, and culture.

Indeed, VR can be thought of as a natural extension or evolution of BIM: immersing designers, creators, and their customers into an environment as the ultimate medium for conveying a concept as spatial experience. While BIM and other media can represent the characteristics of a space, VR can convey the experience of a place. To paraphrase Michael Abrash of Oculus, the immersion, interaction, and intuitive interfaces offered by VR will ultimately require participants to suspend belief, reminding themselves that they are not, in fact, experiencing reality.

With traditional BIM tools, users are on the outside, looking in to a scaled representation of a space.
With VR tools, participants are immersed in a full-scale experience of a place.

So VR is back, and promising that it has changed, and really means it this time. But, will VR last? Maybe so, at least in B2B and professionally, if not for consumers. This time around, the tools are better, the processes and workflows are in place, and popular culture has never seemed more ready to accept wearing computing devices and displays (That said, with apologies to Mark Zuckerberg, grandmothers on Facebook may not be willing to strap a phone on their face to interact with their grandchildren for another 25 years). And with the one-button export from Revit BIM content to VR experience enabled by Autodesk LIVE and Autodesk Stingray, the barrier of entry low enough that every architect, engineer, contractor, and owner can harness the power of VR as easily as they can watch a YouTube video.

The use cases are there for VR as well. No doubt, VR can differentiate you from your competition today. VR can accelerate your design process. VR can inspire confidence in your vision. VR can help communicate your plan. VR can help train your labor force. VR can help you understand what you are buying. 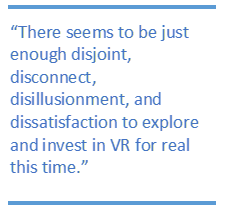 But more importantly than a disappearing technology threshold and interesting use cases; are the business cases there to justify an investment in VR tools and processes? I think so. The use cases, combined with the democratization of the VR technology, alters the equation for business justification and should offer a meaningful return on investment. Professionals in the AEC industry face sufficient pain trying to accelerate design thinking, communicate design ideas, and inspire confidence and comprehension in design and preconstruction visualization. There seems to be just enough disjoint between AEC professionals and visualization specialists, just enough disconnect between documentation-friendly BIM and real-time rendering, just enough disillusionment by owners who expect to experience their projects in order to understand them, just enough dissatisfaction to train craft labor in the field to operate safely and flawlessly, to explore and invest in VR for real this time.

Look at the Autodesk LIVE user guide to get started today.